Archive for the tag “sinosauropteryx”

The first time I learned about archaeopteryx, it was when I was a child.  I loved dinosaurs. In odd continuity to my adulthood, I had a childhood passion for nonfiction.  One of my favorite books was a dinosaur book with a green glossy cover.  The book contained archaeopteryx towards the beginning.  The fossil was fascinating and beautiful.  Its body arched backwards with the elegance of a ballerina.  The fossil was unique because it had impressions of feathers.  It was a link between birds and dinosaurs.  Although it didn’t feature prominently in my dinosaur book, I committed the name and a few facts to my memory.  In my dinosaur book, archaeopteryx was considered the first bird.

Years later, I reconnected with archaeopteryx while I was in London.  In my early 20s, I spent a semester in Ireland.  Afterwards, I explored the UK a little, which involved a few days in London.  I ended up at the Museum of Natural History, which, unknown to me, happened to be hosting an Archaeopteryx exhibit.  I happened upon the special exhibition room with astonishment and delight.  This was it!  The museum had obtained a German specimen of archaeopteryx in 1862, though it usually is not on display.  This fossil was accompanied by a small collection of other German archaeopteryx fossils, along with the Chinese “fuzzy raptor.”  I wandered through the room, awestruck by my good fortune, as the exhibit was scheduled to end later that month.  It is still one of my favorite travel memories and one of the top things I have seen in my lifetime.

Another opportunity to see feathered dinosaurs arose when I was in China, staying with my friend Rose.  Beijing’s Geological Museum of China hosts a collection of feathered dinosaurs from Liaoning province.  Just as archaeopteryx was a groundbreaking fossil discovery of the 1800s, the Liaoning fossils were groundbreaking in the late 1900s (late 1990s to 2000s).  The less easy to remember sinosauropteryx was discovered there in the mid 1990s.  It was the first non-avian dinosaur with filament like feathers.  It was a downy dinosaur.  This discovery implied that all dinosaurs may have had feathers.  Volcanic activity in the area preserved the fossils very well, leaving ashy impressions of feathers.  This has allowed scientists to learn more about the evolution of feathers.  Feathers evolved much earlier than thought and were much more common.  My own impression was that the fossils were not as pretty as my original archaeopteryx.  They were dark and sooty.  Still, the fossils were fascinating and plentiful.  They were also more horrific.  The fossils looked more like mummies or freeze dried birds than bony impressions from a time long ago.  I would still say that this was another one of my top travel highlights.  The Great Wall might be impressive, but what is more impressive than the vastness of Earth’s history and the mysteries of all the life that existed millions of years before our own lives?

I’ve been thinking about getting an archaeopteryx tattoo for a long time.  It has a lot of meaning to me.  It represents my childhood curiosities and hopes for the future.  Like many children I wanted to be a paleontologist.  However, I didn’t know the word for paleontologist, so I mistakenly called it “archeologist.”  I even dressed up in a khaki outfit and brought cow bones to my kindergarten class, for a career themed show-and-tell as an “archeologist.”  No one corrected the error.  Not that being an archeologist wouldn’t be cool.  It also represents some of the neat things I have seen while traveling.  Finally, as an atheist, it has meaning to me as the original archaeopteryx was seen as important evidence of evolution.  In a time when evolution was a new concept, archaeopteryx offered this very clear link between dinosaurs and birds.  All of the feathered dinosaurs have offered important insights about evolution.  And though the new discoveries have made archaeopteryx less important (or just one of many feathered dinosaurs, and certainly not the first), it is still the most recognizable and memorable. 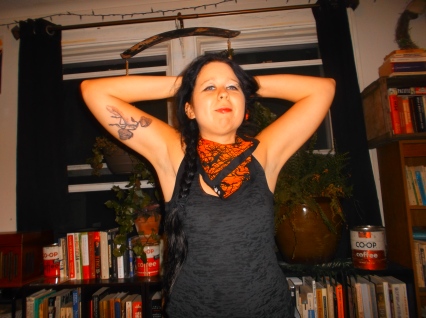 The main thing that has held me back from getting the tattoo is actually dissatisfaction with my body.  I wanted to get the tattoo on the underside of my arm, but fear that my arms look a little too flabby.  The tattoo was going to be a reward for developing awesome arms.  After about two years of waiting, I decided that I am not going to magically become more toned.  Perhaps I should embrace it.  Like the archaeopteryx, I too have wings.  I have tiny little flabs of chicken wings.  We are one.  Alas, I am flightless… and you, archaeopteryx, may have taken flight. 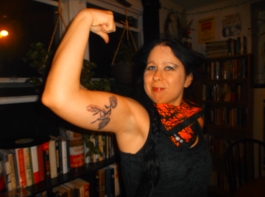