Archive for the tag “Sandhill crane” 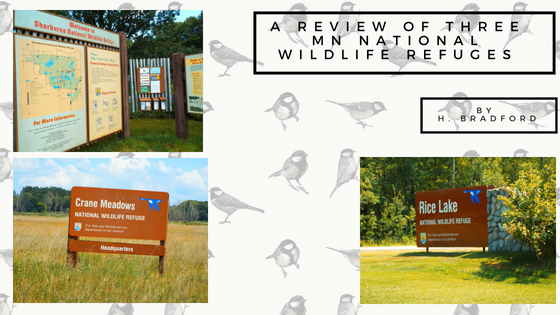 This past weekend (+Monday and Tuesday), I visited three state parks as part of my goal to see all of the state parks in Minnesota.  As it happens, all three state parks were not terribly far from National Wildlife Refuges.  Thus, I also visited three National Wildlife Refuges during my mini-vacation.   National Wildlife Refuges (NWR) are administered by the Fish and Wildlife Service for the purpose of conserving…well, wildlife!  I will admit that I am not as familiar with NWRs as I am with state or national parks.  From my limited experience, it seems that NWRs that I have been to differ from state parks in that they typically do not charge a fee or requite a sticker.  At the same time, camping is not typically allowed and there are fewer amenities, programs, and regular staffing.  They also seem less busy or tourist oriented than state or national parks.  On the other hand, some allow hunting and trapping, which is not always allowed at state parks.  My general impression is that NWRs are less family and tourist friendly, but great for bird/wildlife watching and a variety of independent outdoor activities.  There are 13 NWRs in Minnesota, which are among the 550 spread across the United States.  This is a review of three of them.

Sherburne NWR is located near Zimmerman, MN and about a half an hour south-east of St. Cloud, MN.  I visited the refuge with my brother as a Saturday excursion during my weekend visit.  The park contains oak savanna, wetlands, and prairie ecosystems and offers hiking, but also a wildlife drive and opportunities for fishing and hunting.   My brother and I mostly partook in the wildlife drive, which provides a few opportunities to stop for short hikes.  The primary purpose of the visit was birding.

The wildlife drive took us through a variety of landscapes, including the three mentioned on the website: prairie, wetland, and oak savanna.  We took a short hike in the prairie area, which unlike the state parks I had visited over the weekend, was devoid of bothersome insects.   While it seems that woodland wildflowers peak in the early spring, the prairie wildflowers were in full bloom, creating colorful fields of orange and yellow.   As for birding, the park has several species of sparrows which are not regularly seen in Northern Minnesota, where I live.   For instance, during our short hike, I heard a Field sparrow.  The song is very distinct, even though I have never seen or heard one before.  I imagine that it is the sound of a Frisbee being thrown or a UFO taking off.   There were also many grasshopper sparrows, another sparrow that I hadn’t seen before.  They have an insect like song that sounds like a cross between a buzz and a hiss.  Over twenty species of sparrows can be found in the wildlife refuge, so it seems like a great place to visit to see sparrows (even if I only saw a few species).

The wildlife drive follows along some lakes, where trumpeter swans, double-crested cormorants, great blue herons, and various ducks can be seen.  For me, a highlight of these area was seeing black terns, which are another new bird for me.  I was unable to photograph them, as they zip along pretty quickly.   They don’t range near Duluth, but are found in other parts of Minnesota in prairie or prairie transition areas.  Another highlight was hearing a Least bittern in a ditch by the lake, though I did not see the bird hidden in the thick vegetation.   I am not a great birder, so I would suggest that less skilled birders (like myself) review bird song/calls before heading to the park.  It definitely helps with sparrow identification (as they all look pretty plain and brown) and for hard to spot birds.  I listened to a bird CD in my car on the way to Lake Maria State Park from Duluth (a three hour drive) so a few vocalizations were fresh in my head.

The only buggy area was on the north-west end of the lake, where there was a small oak forests and trail.  We were too mosquito bitten to venture far, but we did see a red bellied woodpecker.  This was a new woodpecker species for me and one that I later saw more of at Charles Lindbergh State Park and Crane Meadows NWR.  As a whole, I would say that the park offered great birding opportunities.  I would definitely return to see more sparrows and to view the Sandhill cranes which migrate through the refuge in large numbers each fall.    I like that the park offered a wide variety of ecosystems and a wildlife drive.  While we didn’t do much hiking, I would like to return to try out the trails.  The park was surprisingly busy, with several vehicles slowly moving along the wildlife drive, also trying to spy on birds.  There isn’t much room for passing, so, be prepared to take it slow and follow the caravan of wildlife enthusiasts!   The refuge is about 30 minutes drive away from Lake Maria State Park, so both could be visited in the same day (though I visited them over the course of two days).

Crane Meadows NWR is only fifteen minutes away from Charles Lindbergh State Park and only about ten minutes away from Little Falls.  This makes it very accessible and very easy to take in along with Charles Lindbergh State Park.  The NWR was a welcome reprieve from the mosquito swarms that characterized Charles Lindbergh State Park.  Crane Meadows NWR was bright and sunny, and although the trails followed along the Platte River, the wildlife area lacked the deer flies and mosquitoes that plagued my other outdoor adventures over the weekend.  Crane Meadows is only 2000 acres (compared to over 30,000 for Sherburne NWR) and does not have a wildlife drive.  Instead, it offers a few looped trails along the Platte River to Rice Lake.  The longest loop is just under four miles.  I hiked this loop, which was the best hike of the weekend because 1.) it wasn’t buggy.  2.) There was an abundance of birds.  3.) The trail passes a variety of ecosystems, such as oak savanna, tall grass prairie, sedge meadow wetland, and more!  The trail can only be used for hiking, so horses and bicycles are not allowed.  Perhaps owing to the length and limited use, I did not see any other people on the trail.

As I already mentioned, the hike was very enjoyable, with easy terrain and a variety of habitats in one relatively small area.  I did not see as many birds as I did at Sherburne, but I also covered a smaller area.  There were some noteworthy birds on the hike, including a great crested flycatcher, another new bird for my list.  The yellow, gray, and rusty orange bird is easy to identify (which is not true of most flycatchers, which look pretty similar in their variations of pale yellow, olive, and gray plumage.)  Another highlight was a few red headed woodpeckers, which I have not seen in Minnesota before.  I also saw red breasted woodpeckers and a swamp sparrow.  Other sparrows included song sparrows and chipping sparrows, both of which are pretty common in Duluth.  The martin house was busy and there were also many barn swallows.

Like Sherburne NWR, I would definitely visit Crane Meadows again.  The leisurely hike and variety of birds made for a great way to spend an afternoon.  I would say that the main downside of the NWR is a lack of amenities.  There are no toilets on the trails, but there is a port-a-potty at the parking area.  On the other hand, there was hardly anyone at the NWR, so that was a plus.  As a whole, it is a nice, compact wildlife area with easy access to Little Falls.

The final NWR that I visited was Rice Lake NWR, near McGregor, MN.  I have visited this area many times, but couldn’t resist making a pit stop on my way home to Duluth.   Of the three, this NWR has the widest variety of things to do.  There is a wildlife drive, which I have done many times.  There is an observation deck and several hiking trails.  The NWR also features Native American and Civilian Conservation Corps history.  Native Americans continue to use the wildlife area for harvesting wild rice and maple syrup.  In fact, Native Americans have used the park since at least 1000 BC and there are burial mounds within the refuge.  Each time I visit, there are usually at least a few people fishing, which seems to be the most popular activity.  Rice Lake NWR is rich in waterfowl and each spring and fall during migrations.  In fact, the area holds the state record for the most waterfowl seen in one place at one time, when a million ring necked ducks were observed in 1994.   Like the other two parks, there is a wide variety of sparrows that can also be seen, including the rare LaConte’s Sparrow (which I have not seen).

Where the wild rice grows…

In addition to the hiking trails, wildlife drive, fishing, birding, and Native American history/use, this NWR generally has pretty good amenities (at least compared to the other two refuges).  There are several toilets or port-a-poties spread throughout the refuge as well as two picnic areas.  There is no running water, however.  The refuge itself features mixed forests, lakes, and bogs.  Because it is a very wet environment, there are always lots of insects!  Of the three refuges, this was the worst, with swarms of deer flies AND mosquitoes.    I have never successfully hiked in this refuge since these attempts are almost always thwarted by voracious insects.  Even an open window during the wildlife drive attracted unwanted deer flies into my vehicle.

National Wildlife Refuges are a different experience than state and national parks.  While they may not be as full of tourists, activities, and amenities, they are great places to spend a day taking in nature.  All three of these locations are relaxing, tranquil, and great for birding.  All three are places that I would visit again.   There are only 13 of these gems in Minnesota, and only 12 can be visited!  I will definitely be visiting other NWRs in the future and hopefully you will be inspired to visit them as well!