Archive for the tag “poem”

Every self is a hollow monument,

an ode to accomplishment, attachment, advancement, and the other virtues of civilization.

Behind each strong facade is fiber glass fillers and paper mache.

A hollow space to be filled with depression or distraction.

Together, we are a marble city,

made tidy by endless sweeping

and the tireless scouring of each surface,

until it all shines right and white.

Some sweepers and sculptors know it is all for show,

but without scripts and statues,

What would we be?

What would we know?

(A poem that I wrote while thinking about Turkmenistan, but also the social construction of the self/mechanisms of social control)

I am the thinking universe.

4.5 billion years of evolution to think the thoughts I thought today,

to write them down,

signalizing to life on earth another syllable in the tongue of infinity.

My joy and my pain,

expressed prettily on paper are the voices of

Every living and non-living thing-

exists in me and through me.

The wings of moths are my whisper

And the patter of cat’s feet are my cries.

The universe doesn’t even know it is speaking!

It doesn’t mourn its dead!

Its worth, words, and connections will die in my head. 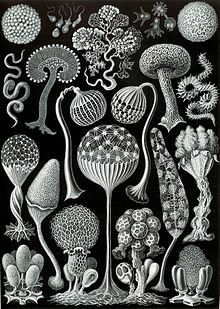 an image of slime molds from Wikipedia.

There is an archaeopteryx on my arm.

It matches the fossil in my chest,

the amber in my head,

that I don as armor

when I think I’ve bitten off more than I can chew.

The more I go extinct,

the more I think about ferns and feathered dinosaurs.

The things that lived before-

and bones made of stone.

I will leave nothing.

I am too soft and temporary.

(I had a dream wherein someone wrote me a series of “hate poems” on post-it notes.  I found these poems under a table.  While I don’t remember the poems from my dreams, this is a reconstruction of one of the poems.)

You are not a tornado or electricity,

You are an island of nightmares set adrift from the continents.

You are not lips or the stars,

You are the gap between them and the frustration space brings.

You are not a memory or a journey,

You are a beggar passed on the road- whose hands and eyes grasped for more.

You are not for warmth and wanting,

and that should explain everything.

(Anna Akhmatova was a celebrated Russian poet who was censored during Soviet times.  She was an aristocrat who did not flee the country after the Russian revolution.  While I am from a political tradition on the other side of history, I like her poetry and reflected upon her a little while visiting Tashkent, where she lived during WWII.  Some of the poem’s images come from Bishkek though…)

ploughed under the earth.

so it is best to forget the things that colored the gray cities.

By the time the snow falls, memories will become monuments

to hide in the overgrown wilds of city parks

or to tuck behind the shuttered museum.

These statues must be stored safely out of sight and out of mind,

lest they become unorthodox idols to a high class poetess or the feminine divine.

Tashkent was a stop in a long migration of mourning

and a hermitage for the heart that would not leave.

As for me, I am just a traveler and only ghosts stay behind.

The city is empty of tourists and souls in transit.

I am also a little emptier.

when even the birds have somewhere better to be.

These days are thick with quiet, sorrowed anticipation of the cold

and creeping anxiety for stomach flu and Christmas.

Why today must the clouds hang so heavy and gray?

If it as if they are made of tungsten or tin,

and leaden with snow and rain.

Midsummer wind and wet is winter’s promise and portent.

An Attachment to Dark Spaces

An Attachment to Dark Spaces

(A poem that is generically about how feelings, attachment, and rejection can feel a lot like the universe itself.  The poem can be applied to many situations where I have wanted to assert my existence through emotion.)

I won’t make you my surrogate for the universe,

a stand in for its vast, indifferent cold.

You aren’t a stunt double for its absence of God

or the black tide of time that gives and takes,

You feel like a universe that stretches outward into yawning space,

becoming so distant it tears itself apart.

But, you won’t be my force of falling apart.

I can do that just fine on my own.

Surely, I adored you…

as a gray speck locked in the cruelty of cognizance in time and space.

if only as a passing addiction to my place in the abyss.

And I wished so much that my existence mattered to you or to the cosmos you came to represent.

The Lesson of the Landscape

The Lesson of the Landscape

(This is a poem that I wrote on my last trip.  My poems aren’t that great, but sometimes I feel inspired to write them).

the cure-all for all sorts of infatuations.

It lifts like a fog, sending droplets of fantasy into the heat of the day.

When only a scorched landscape remains, it becomes clear what was a mirage

with certain emotions and certain minds.

But, when the illusion is gone, one can appreciate the ways a desert shifts-

from dunes, scrub, cacti, and Karroo.

What is real, austere and severe.

That is the lesson of the landscape.

(A photo I took last year in Namibia)

I remember that merciful boot that crushed the broken bird who struck the hospital window.

I remember those hunched shoulders overlooking the dead chicken, beheaded with a shovel.

A human life exists to bear witness to the death and life in the universe.

Our life is paid with the lives of countless lesser things.

We are stalactites, carefully formed from the suffering of each cow turned hamburger.

Each mouse ground up with the grain.

Our monuments are graves.

We eat with our eyes and brains as much as our stomachs and teeth.

Vegans clamber over carnivores like rats in a flood for the moral high ground.

All the same, both are doomed to drown.

When I see a boot and a shovel,

I see our place and our fate,

There are many ways to be white.

Most get thick and fatty.

Some turn to sour milk,

curdled by too much sacrifice

and all the things that didn’t come easily enough.

For them, there is no land of milk and honey.

Even when the gods of privilege produce enough manna to fatten a family,

The pail is always half-empty.

It always pales in comparison to the handouts given to those less pale.

They ingested the world’s venom until it turned them bitter.

They’re the ones always making a stink!

They can’t even smell their own crippling scent!

They are fit enough to survive,

but unfit to dissent.