Archive for the tag “pandemonim”

Happy May Day activist friends.  It was a dreary, windy, snowy, AND rainy May Day in the Northland.  I didn’t do as much as I would have liked today, but I did take time to write up some notes on some of the activist events that happened in April.  This isn’t the most detailed account, as I should have taken notes while attending these events.  Despite the lack of detail, the ongoing upsurge of activism is encouraging.  It is also a little exhausting!  For a matter of comparison, I have attended about 73 political events (films, protests, meetings, etc.) since January 1st.  This is about the same that I attended for the entire year of 2016.   This is not to brag, as I know people who have attended more than this.  Rather,  I think it is a useful measure of the relative upsurge in social organizing.   April weather may be gloomy, but activism is in bloom!

April 4th was 2017’s Equal Pay Day.  This means that women must work until April 4th to earn as much money as men made the year before (i.e. must work four months longer to earn the same median income.).  In 2016, women earned about 79% of the median income as men.  Of course, broken down by race, this is much less.  If I remember rightly, Black women make about 63 % of the median income of men and Native American women make about 58%.  Women over the age of 55 make about 64% of the median income of men.  A wage parity rally was organized by the Feminist Action Collective and other organizations.  The noon rally at City Hall was well attended and featured a speech by the mayor.  This was also a chance to re-use some of my signs from the International Women’s Day Strike.

Each year, Veterans for Peace hosts a Tax Day Protest.  The event is meant to highlight how our tax dollars should go towards meeting human needs rather than our bloated defense budget.  This year’s event was very successful!  Anti-Trump sentiment brought out more activists than any other year that I have attended this event.  The event began at City Hall with various speakers.  This was followed by a march to the MN Power Plaza.  Activists held signs to attract the attention of passing cars.  There were a few more speakers and some music at the plaza.

The Feminist Justice League hosts a monthly outdoor adventure + learning activity called a Feminist Frolic.  This month, we tried out geocaching.  In honor of Earth Day, we did a cache in, cache out event.  This involved collecting garbage while we geocached.  Leslie taught everyone how to geocache with her very detailed presentation about the rules, language, and history of this activity.  I gave a presentation on feminism and trash.  It was my first time geocaching!  I really love it and have since found 40 caches in my area!  We also collected two small bags of garbage from the park. 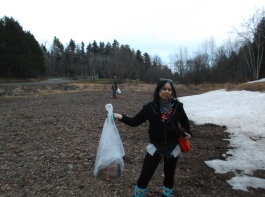 April is National Poetry Month.  In observance of the month, Pandemonium’s monthly Bi with Pizza Pie meeting featured Lucas D.’s presentation on a few bisexual poets and sharing of his own poetry.  He shared poetry from a variety of poets and we had a short discussion about themes that were observed in the poetry.  Lucas has written several books, but his newest is a collection of poems called “Since We Left the Oregon Trail: Poems for the Xennial Generation.”

Like many cities, Duluth hosted a March for Science.  It was attended by 1200 people, though I did not attend due to my work schedule.  As such, I can’t report back on this as I was not there.  However, it seems like it was a great turnout!

April 24th: Socialism and a Slice

Once a month, Socialist Action hosts a socialism and a slice event.  This month, various topics were discussed.  The activists at the table discussed things such as racial minority unemployment in Duluth, the lack of low income housing, work on the Homeless Bill of Rights, the Science March, etc.  The purpose of the event is to discuss current events and typically there is a heavy focus on local events and politics.

As many as 800 people showed up for the Climate March on Saturday, April 29th.  The event was hosted by Interfaith Power and Light, which organized a climate march near the Duluth Zoo over a year ago.  As such, the event was well attended by religious groups.  Many local politicians were also there and spoke out during the rally.  The rally was followed by a march along the Lakewalk, which ended in more speeches and several tables with information on various environmental groups.  Over 200,000 people marched in Washington DC and tens of thousands more marched across the United States.  I made a few signs for the march, which I thought turned out quite well. 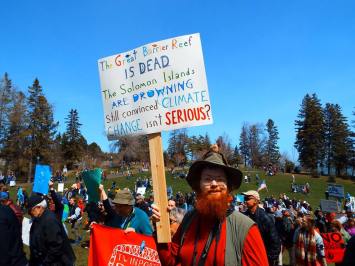 HOTDISH Militia is a local group that has been around since the early to mid 2000s, but became less active over the years.  The election of Donald Trump resulted in a flourishing of feminist activism in the Northland.  This gave new life to the HOTDISH Militia.  The group works to raise funds that help low income women access the Women’s Health Center in Duluth.  This is the only abortion clinic for the northern half of the state of Minnesota, northern WI, and Northern MI.  Thus, these funds and the clinic are extremely important.  One of the major projects that the group has worked on this spring is organizing the Bowl-a-thon.  The Bowl-a-thon is organized through NNAF, or the National Network of Abortion Funds.  HOTDISH is one of two funds in Minnesota.  The national organization has an anonymous donor who has offered $2000 to every team that raises over $5000 for the Bowl-a-thon.  The goal of the campaign was to therefore raise $5000 locally so we could get those matching funds.  With hard work, weekly meetings, and generous donors, the goal was met.  The Feminist Justice League’s team raised over $700 and dressed up like feminist superheroes!  Our super hero team included characters such as Madonna Whore, Traffick Stop, Nasty Bitch, Rainbow Fight, Miss Anti-America, and Riot Grrrl Scout.  Although we didn’t raise the most, I am very proud of the team and our fundraising.  The entire campaign raised almost $8000.