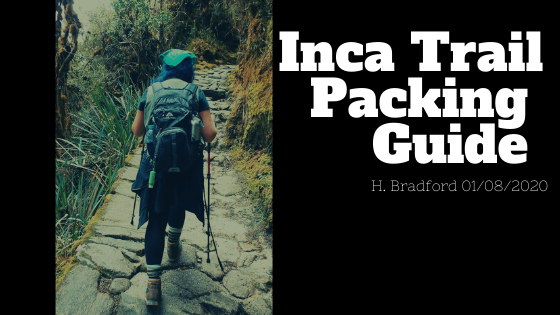 Back in November, I hiked the Inca Trail.  If you read my previous blog post, https://brokenwallsandnarratives.wordpress.com/2020/01/03/hiking-the-inca-trail-while-out-of-shape/, then you learned that I wasn’t in the best shape.  While I struggled along, I took some mental notes of what I would pack and or not to pack if I ever did it again.  There isn’t a lot of room to pack many items. We were provided a small duffel bag which could be packed with about 5 KG of items, which included a sleeping bag, sleeping bag liner, toiletries, and clothes. It is up to each hiker to carry whatever else they need beyond the 5 KG (this weight may vary by company) in a day pack.  Hopefully, most hikers will not need too much more.  Medications, rain gear, layers, snacks, and water are among the things carried in a day pack. I probably packed a bit too much, but at least this can provide an overview of what I found useful.

Things I didn’t Pack, But Should Have:

Based on my experience, this was the number one item I should have packed.  There are a number of reasons why this would have been handy. One, I was not feeling well the third day and didn’t drink enough water.  When a fellow hiker, Elise, put some berry flavored electrolyte powder in my water bottle, I almost immediately felt better and more interested in drinking water.  This helped me to stay hydrated and feeling better for the rest of the day, as it was like drinking a refreshing, yet watery Gatorade. Dehydration can exacerbate the symptoms of altitude, so I suspect this is why I felt so terrible. Secondly, the water provided by porters is filtered and boiled, but doesn’t taste great.  I saw porters washing dishes in a stream, which I have to assume is also one of the sources of water for the trek. There is some running water early in the trek, but I would be surprised if large amounts of water was slugged up on the mountain with everything else. Whatever the source, I found that it sometimes tasted a little rusty (perhaps from rusty pipes) or just a little off.  The water is lukewarm while hiking, which may also be a deterrent to drinking enough of it. Adding flavored electrolyte powder masks the flavor of the water, making drinking water more likely. Thirdly, some people become sick to their stomach on the trail. This thankfully didn’t happen to me until after the trek, but having electrolyte powder can help keep hikers hydrated if they have diarrhea.  Anyway, I can’t stress enough how much having a rehydration pack helped me!

Water is an important theme here.  Water was the heaviest item that I carried.  Hikers usually start the day carrying one or two liters of water, which can be 4.4 lbs (if two liters).  It can be many hours before this water is restocked (until at least the lunch stop). I carried two water bottles (one disposable plastic one I carried the entire trip and one that was metal).  Since I carried them on my backpack, to take a drink of water I had to stop and remove the bottles. This deterred me from drinking, since I didn’t want to bother stopping. A water bladder with a hose would have been far easier, as I could have had water on the go.  The worst thing is that I actually brought a water bladder along on the trip, but felt it took up too much space in my small backpack so I opted for the other water bottles! I could have avoided dehydration had I ensured easier access for my water.

In the interest of saving space and weight, I did not bring any cold medicine.  This was foolish, considering that I had only recently recovered from a six week chest cold.  When symptoms of the cold returned, I didn’t have any medicine with me! Thankfully, Elise gave me a cold tablet, which really opened my airways and stopped my coughing.

Speaking of cold medicine, my unhappy lungs would have loved some Vicks vaporub.  Vicks is my go to cold relief medicine, since it opens my airways. It can also be used to provide mild relief to sore muscles.  Another way that I would have used Vicks was to block out the terrible toilet smells. Seriously. I gagged several times while trying to use some of the squalid toilets towards the end of the trek.  Vicks is strong smelling, so I could have applied it to the bandana over my nose to mask the ungodly odor. I have heard that police use Vicks to help them block the smell of dead bodies, so it should also provide some relief against squatty potties. 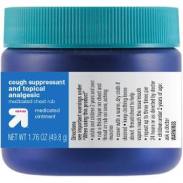 I didn’t want to pack two different kinds sunscreens (one for my face and one for my body), so I went with the facial sunscreen.  It was SPF 110, which was higher than the body one, and less greasy. My intent when was to save space in my bag while packing one that I didn’t mind putting on my face.  I probably should have packed both. My face did not get burned, but my forearms got roasted with severe sunburn. A waterproof, sweat proof formula might have saved my skin!

I went through a roll before the trek was over.  Granted, the locally available toilet paper is a little thin, flimsy, and economical on the roll.  I also used the toilet paper to blow my nose. Once the toilet paper was gone, I had to use wet wipes I had packed and napkins I stole from lunch.  This wasn’t an emergency, but would have been without the backup paper.

Altitude and physical exertion was unkind to my uterus.  It causes spotting to the degree that it seemed like a full blown period at times.  I happened to have a couple pads with me, but I was concerned that if things got heavier, it would not be adequate.  There are many things that can cause a period to come early, late, or spotting to occur. With that said, it is wise to pack a few pads, tampons, a diva cup, etc.  I use Nuvaring, which SHOULD prevent a period from happening until it is removed and has always reliably worked in this manner for me. The hormones were no match for the hike.

There are long stretches of the hike without toilets.  Hikers should expect to see toilets at camp (so in the morning and at night) and usually at lunch.  It really isn’t advised to poop on the trail, as a person is expected to carry their used toilet paper with them.  On the other hand, if a person drinks enough water, having to urinate is a likely outcome. There are areas of the trail that really don’t have anywhere private to pee (as there is a ledge on one side and mountain/rock on the other).  For those who lack penises, having a she-wee might be a useful way to quickly and privately urinate. I have one, but didn’t pack it. I didn’t want to waste the space and didn’t know how I felt carrying around a urine soaked rubber funnel if I indeed had to use it.  A person can wash it with water from their water bottle if they do use it. I don’t think it is essential, but it could be useful. Also, I think “She-Wee” is a fun name, since it rhymes. But, I want to point out that it is not inclusive of trans/non-binary travelers who may not identify as “she.”  Go Girl, Lady J, and other similar products are also pretty gendered. I didn’t previously know what to call this product, but travel urinal is probably the most trans friendly. 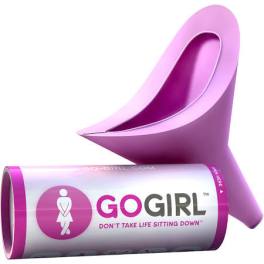 Things I Packed, But Didn’t Need:

I worried that I would get hungry during the long hikes or that the meals would not be enough.  I packed more snacks than I needed, which took up unnecessary space and weight. The meals were always TOO big.  I was constantly over stuffed by the three course lunches and dinners. I slogged along with a belly full of soup each day, as each lunch and dinner included soup.  There was so much food that it felt oppressive. I ate a few of my snacks, including my mini PayDay bars and a protein bar.

I had high hopes for seeing birds along the trail.  Alas, I was too busy hiking to stop and identify the birds that I saw.  I really had to focus on keeping moving. While I did stop for some photos, I was too exhausted by the end of the day to identify the birds I had seen.  I had a bird guide in my day pack, but I didn’t use it at all. I also made my own guide to orchids, flowers, and cacti along the way, which I printed on a few sheets of paper.  Again, I didn’t have time to stop and identify orchids or cacti. I passed them by, aware of their variety and splendor, but unable to take the time to know them.

Since I hiked at the end of November, which was the rainy season, I fully expected rain the entire hike.  I checked the weather forecast before the trek and of course it called for rain each day. Thankfully, I only rained one afternoon and the rest was mostly clear.  However, because I expected the worst, I over packed rain gear. I had both a rain jacket, disposable rain poncho, and heavier rain poncho, when the rain jacket alone would have sufficed.

Although it was sunny, I felt like the hat only got in the way.  It would blow off my head or dangle sideways from its strap. In the end, I used a bandana to protect my head from the sun. 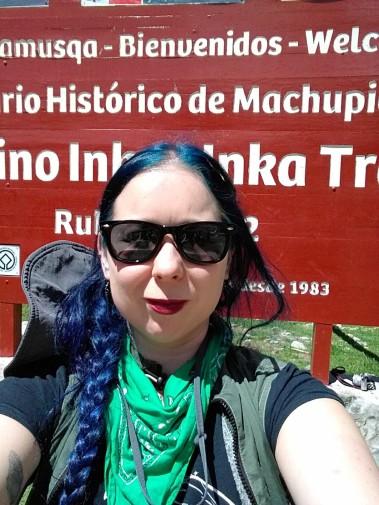 You can see the sunhat is already in the way….

Things I was Glad I Packed:

I can’t imagine hiking the trail without altitude medication.  I was only prescribed three days worth, so I had to purchase more.  It was about $20 in Cusco and did not require a prescription. I am not sure how much the $20 bought me, but I needed it for about ten days and had some leftover tablets when I returned.

An all around good idea for the day pack!  And a great way to clean up after a long day!

Again, another good idea for the day pack!

Altitude, hygiene conditions, less familiar foods, etc. put a person’s digestive system to the test.  I didn’t became ill on the hike, but I did experience some heartburn and mild upset stomach. 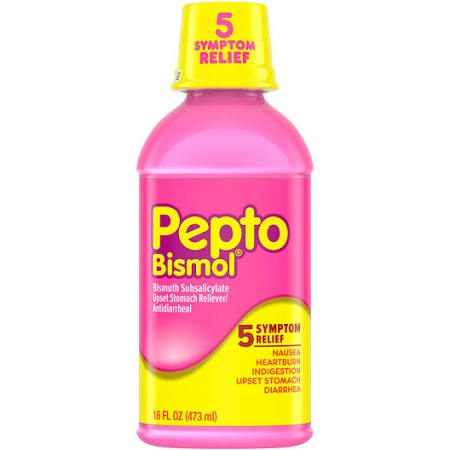 Although I didn’t eat many snacks, my mini PayDay Bars were a treat at the end of the day.  Because they weren’t chocolate, they didn’t melt on the hotter days. 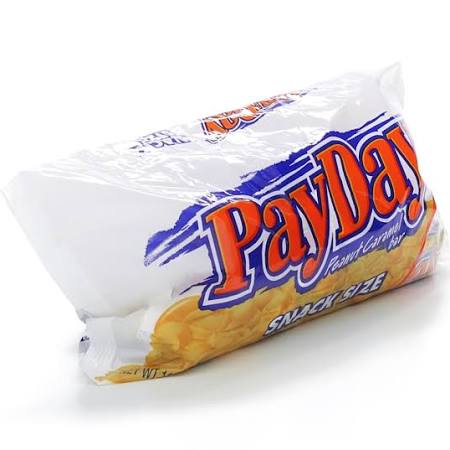 This may seem frivolous, but it helped me feel less dirty and unkempt after four days without a shower.  I wear makeup each day, so I felt more like myself. 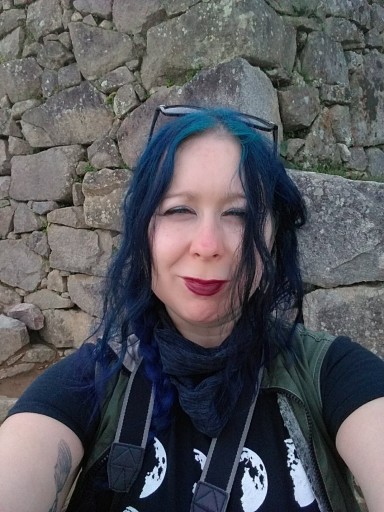 Bandanas are useful in many ways.  I used mine to protect my scalp from the sun, around my neck, and to wrap up a severe sunburn. 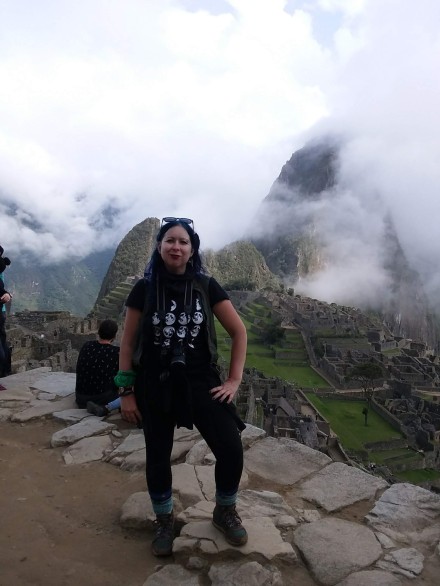 The bandana is covering a terrible burn.

This took up a lot of extra space, but it doubled as a pillow and provided extra warmth during the colder nights.

2 t-shirts (may have benefited by another)

Sunhat (not needed, as bandana was used for this purpose)

(Note: many people packed a winter jacket, but I felt fine without one and just layered my clothes)

Small notebook (I did take some notes along the way)

Hairbrush (a comb would have taken less space)