Archive for the tag “greece”

Once again, here is a post about my trip to Eastern Europe this past summer.  Again, it is just an overview of my impressions.  I am not going out of my way to be sensitive or politically correct, so I do apologize in advance if anyone finds it offensive.  It is meant to be an honest overview of how I perceived the countries.

Greece isn’t a part of “Eastern Europe” in my imagination.  It isn’t Slavic and doesn’t have a history of communism, so it is different from the other places that I traveled to.  Actually, Greece does have a history of communism, in that it had a civil war between communists and fascists/monarchists/nationalists after WWII.  I think you can imagine who the U.S. supported.  In any event, I saw more hammers and sickles (in the form of graffiti) in Greece than any other country I traveled to.  I really should have counted them, since I think I saw 25 around Athens alone.  Some folks just aren’t on board with austerity.  Anyway, as a kid I loved Greek mythology.  Greece was a place that captured my imagination.  It had the elements of my childhood imagination: mountains, monuments, olive trees, sea, and sunshine.  I visited Athens, Parga, Thessaloniki, and Meteora.   Of course, Athens stands out, since it was pretty amazing to visit the Parthenon, Acropolis, Temple of Hephaestus,  Olympic Stadium, Temple of Zeus, and so on.  It was strange to think that I was standing in the same places where Aristotle, Diogenes, or Democritus once were.  I will also say that I felt a sense of gender injustice, since although there were these great monuments and great histories, had I lived at the time, as a female I would have been home bound and excluded from this culture.  This is strange, considering there are statues of goddesses as warriors, hunters, and muses.  There are powerful women everywhere, but women themselves were treated as property.  Beyond that, what else can be said?  I think Greek food was the best out of all the countries I visited.  Also, Greek people were pretty extroverted, with dancing, breaking plates, singing, affection and so on.  I am not extroverted, but it was fun to watch.  Also, I felt bad for the Greeks, since the prices were the highest in all of the countries that I traveled to.  Sure, prices are higher for tourists, but still….I am not sure how Greeks afford anything when the prices seemed comparable to the U.S. 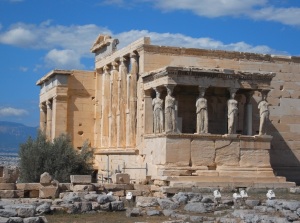 I was sick for 80% of my trip.  This is not a lie, as I wrote in my journal each day that I was sick.  I had a chest cold, which accounted for much of that sickness.  The rest was stomach ailments, which ranged from mild diarrhea to 12 plus hours of nausea and dry heaving while en route from the Czech Republic to home.  With that said, Slovenia was one of my favorite places.  One reason for this is that I felt relaxed.  Although I had some minor stomach issues there, I felt comforted by Lake Bled, which reminded me of home.  I walked around the lake twice.  It is hard to feel sick and miserable in the midst of forests, crystal clear water, a castle on a hill, and swans.  Also, Bled featured a Mexican restaurant.  I was happy to try the Slovenian take on Mexican food, which included a garnish of cabbage.  I also tried a rich, delicious Cream Cake…twice.  I hiked through the woods, enjoying solitude and a lack of direction.  I also visited the aforementioned Bled Castle, thankful for the clean, well-kept toilets.  Slovenia was like a fairy tale.  It reminded me of a Yugoslavian Switzerland.  Ljubljana, the capital, was also quite nice. 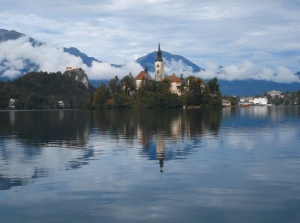 Montenegro:  As the name suggests, there were many mountains.  I was in Budva and Kotor, which are both coastal areas hemmed by forested mountains from behind.  Budva had palm trees, white sand with pebbles, and an old town of Mediterranean architecture.   Kotor was a bay, also with Venetian looking buildings and squarish homes with red, clay tiled roofs.  It seemed that there was a lot of tourism and wealth.  For instance, I saw a yacht with a helicopter on it.  This was one of several yachts parked in the bay of Kotor.  Since I am not a beach oriented person (i.e. I don’t care for swimming and feel self conscious in a swim suit) it wasn’t my favorite place.  Though, hiking in the mountains could be fun.

Austria:  I really only passed through Austria, so I won’t say too much.  I think…Austria seemed silly.  German looks silly in writing.  Maybe the main reason I thought that Austria seemed silly was because we stopped at a rest stop that had a slide to the toilet and a cluster of animatronic, singing animals.  This occurred at more than one rest stop.  We also stopped in Graz, which is the home town of Arnold Schwarzenegger.  Somehow, this also seemed silly.  Sorry Austria.

Czech Republic:  Probably the coolest things I saw in the Czech Republic were the church made of bones in Kutna Hora and the working class astronomical clock in Olomouc.  The former was cool since…well, where else in the world will I see a church that has been decorated with human bones?  The clock was interesting because it is a socialist realist clock…complete with workers instead of saints.  As for the Czech Republic, it was the first country I visited on my trip as well as the last.  Therefore, seeing as my frame of reference was Russia, I was surprised how green, clean, and developed it looked.  (No offense, Russia.)  I saw many windmills, attesting to some concerted effort to use renewable energy.  The towns did not show signs of monolithic communist housing.  Instead, the houses were small with orange roofs.  There were also churches with unique, witch hat shaped steeple spires. 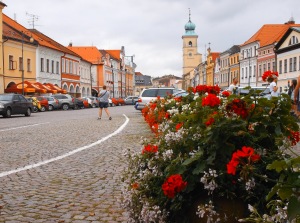