Archive for the tag “BDS”

The title of this blog post, unlike the signs at the March for Science, is a little uninspired.  To tell you the truth, I regret that did not attend the March for Science this past Saturday.  This is not because I am against science, but because I had worked the night shift the night before and didn’t want to short change my sleep.  I support the march and was glad to see that Duluth had a great turnout.  It was wonderful that individuals who do not normally attend marches went to the science march. I was also glad to see that there was a great turnout across the country.  Science is important for society and should be defended.  The fact that it was defended with a march is important, since it normalizes protest which is an essential organizing tool as it is the public, mass, visible sharing of ideas and demands.  Thus, I am elated that another protest has happened and that it was attended by hundreds of thousands of people.  However, I couldn’t help but notice that the media treated the science march very differently than the women’s march.  I think that this is because science is less of a threat to the functioning of capitalism than the liberation of women.

To be fair, I am very biased.  And, to be fair, this isn’t a very scientific analysis of the issue.  Nevertheless, I noted very positive media coverage of the science march.  For instance, an article in Forbes described the march as happy, delightful, and funny.  Various articles highlighted fun costumes and signs.  Fortune also called it fun and a “celeprotest” with signs that were more clever than other protests.  Many articles pointed out that it was non-partisan, though certainly a reaction to the Trump administration.  The coverage discussed the large crowds and hearty, fun protesters who braved the rain.  Now, there was certainly positive coverage of the Women’s March, but there was also negative coverage about the signs left behind, the lack of diversity, problematic pussy hats, partisanship, etc.  There was some critique from fellow scientists regarding the march, but this seemed centered upon the idea that science should be neutral and apolitical.  There was a lot less criticism about the lack of diversity or that the science march was a display of white privilege.  The science march was not called out in the same way for not supporting Black Lives Matter.  The lack of scrutiny worries me, as certainly the March for Science could have been more diverse and certainly science has played a role in the oppression of various groups in society.  This is not to let white feminism off the hook, but to note that many social movements struggle with their role in oppression.  To me, the glowing media coverage represents the fact that science does not represent a real threat to capitalism or the status quo.  At the same time, the Women’s March was covered more positively than Black Lives Matter and the Occupy Movement.  Black Lives Matter calls into question police authority, the entire criminal justice system, the state’s right to kill, and racism.  In reaction, politicians have scrambled to limit the right to protests that block traffic and have sought to impose fees on protesters.  The Occupy Movement called into question banking, finance, social inequality, the right to occupy public space.  The media portrayed protesters as frivolous, unruly, and even dirty.  While the BDS movement does not receive as much media coverage, Democratic and Republican senators in Minnesota worked together to pass restrictions against offering contracts to vendors who boycott Israel.  These movements are/were denigrated because they are very direct in their threat to the existing order. 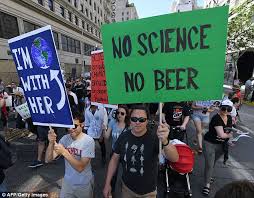 The reason why I don’t think that science is a direct threat to capitalism is that, on some level, capitalism needs science to operate.  While the capitalist economy is irrational in its destruction of the planet, focus on profits over human needs, and tendency towards crisis, it is very rational in other aspects.  The process of extracting profit from labor is pretty rational.  It is no wonder that the art of extracting more profit from labor was called “scientific management.”   Frederick Taylor realized that labor output could be treated scientifically.  Capitalism also seeks to generate more profits by increasing production.  Increasing production often requires the use of technology, again, a very rational aspect of capitalism.  Capitalism also requires wars, as this destroys competition, opens up new markets, and defends a country’s access to raw materials and cheap labor abroad.  Science is necessary for the creation of more powerful machines and weapons.  Research and development was actually been an all time high last November, as $499 billion was spent on R&D in the U.S. in 20015 (numbers released 2016).  Over half of that money went to defense alone.  Finally, where would capitalism be without science?  There would have been no industrial revolution and no subsequent imperialist conquest of the globe.  This does not make science bad, but, it should illustrate that science is actually pretty useful to capitalism.

Despite the many ways that science serves capitalism, it remains controversial in society.  It seems odd that religiosity, irrationality, alternative facts, spirituality, etc. have any appeal in this system.  Why does this conflict arise?  Why are things like evolution and climate change at all controversial?  There are many reasons for this.  For one, Karl Marx observed that nothing is sacred in capitalism.  For instance, children are nothing more than future workers and soldiers.  If not for the efforts of the labor movement, the childhood enjoyed by many American children today would not exist at all.  A woman’s womb is a machine to produce more workers and soldiers.  A family is useful inasmuch as it reproduces labor and controls women’s sexuality and unpaid labor, but there is nothing good or virtuous about the family itself in the context of capitalism.  Capitalism actually stole holidays or holy days from the masses in the interest of creating a disciplined workforce with a reliable, year round, schedule.  I am sure many readers who have worked on Christmas or Thanksgiving can understand how nothing is sacred in the economy.  Time off is treated as a privilege.  Work divides families.  It keeps people away from their children and makes them decide whether to take an unpaid day off work to see a school concert or attend to a child’s illness or face the economic consequence.  In many ways, it would serve capitalism better if workers were nihilists with no love of their family, no joy in friendship and romance, no faith in religion, and no belief in any liberating ideology.  Yet, no only does religion persist, it often exists at odds with science.  Why?

Both science and religion play important roles in society.  Karl Marx famously called religion the opiate of the masses.  In Marx’s time, opium caused two wars between Western countries and China, meaning that like opium, religion is used by those with power to cause division and conflict in society.  At the same time, opium was used to soothe pain.  Religion therefore soothes the pains wrought by capitalist society by creating community and offering hope of a better world.  The first function of religion is particularly important in capitalism.  While science is generally pretty useful to capitalism, it can sometimes be pesky.  Environmental science is pretty irksome.  Climate change is very nettlesome.  Rabid religiosity that is anti-woman, anti-gay, anti-environment, anti-trans, etc. is wonderfully divisive.  It allows capitalism to chug along without unified opposition to the pillage of the planet.  It allows capitalism to chug along as workers do not recognize their common oppressions and blame social problems on liberal teachers, feminists, gays and lesbians, atheists, or other religions.  Religion is a useful tool in capitalism’s toolbox.  And, since most religious folks focus their dismay about science to decry climate science or evolution rather than say, nuclear physics or science used in the interest of the U.S. war machine, capitalism can allow some degree of anti-science sentiments.

(I am not sure if this is a photo of a real event or fake, mockery of an anti-science protest)

Besides the fact that anti-science is helpful in dividing people and thwarting environmentalism, because of its role in capitalism, science has been used to oppress people.  Social Darwinism and scientific racism were used to justify the exploitation and colonization of people of color.  Eugenics used notions about genetics to justify segregation, forced sterilization, forced abortions, institutionalization, and euthanasia.   The knowledge and experiences of women, Native Americans, African Americans, poor people, immigrants, and other oppressed groups is routinely ignored as emotional, irrational, backwards, or foolish.  Science hasn’t been used in kind ways.  Psychologists have classified some groups as deviant or sick.  Until 2012, being transgender was considered a mental illness.  Today, only gender dysphoria is listed as an illness.  Homosexuality was viewed as a mental illness until 1973.  Members of those groups may feel a certain antagonism to the science that has classified them as sick.  African American men were lied to and denied treatment for syphilis so that the progression of the disease could be understood in the famous Tuskegee syphilis experiment.  Many marginalized groups such as racial minorities, prisoners, and the mentally ill, have been experimented upon.  In the 1800s, medical institutions arose and monopolized professions and knowledge that was once more democratically available.   If there is some hostility towards science, it is quite understandable considering this history.

To return to the March for Science, these sentiments should in no way diminish the importance of this march.  Scientists need to march.  They need to stand up for science that promotes social justice.  Science is not neutral.  It is very political.  Neutrality is political.  A better world is possible and science can help us achieve a better world.  Just as science has been a tool of capitalists, it can be a tool of the masses.  The sentiment of the march was that science should be used for creating a greener, safer, healthier, easier life for everyone.  To this end, I hope that scientists and supporters of science acknowledge the dark aspects of science’s role in capitalism.  I hope that oppressed groups can feel welcomed by future events and that their experiences and knowledge contribute to a full understanding of our world.  If “scienceism” emerges as a social movement, I hope that it is called to task in the same way that the Women’s March and feminist movement has.  I also hope that protest continues to be viewed as a legitimate response to social problems.  At the same time, I do not think that science itself will liberate us.  It would be helpful if everyone believed in climate change, as this would shift the discourse from “is it real” to “what can be done?”  However, the “what can be done” that is promoted by mainstream institutions will always serve capitalism.  It will never take us beyond market and individual solutions.  We could collectively buy electric cars or green lightbulbs.  We can compost and recycle as the world continues on its path towards the next mass extinction.  The warm response to the protest indicates to me that the powers that be are not particularly afraid of science.  They are mildly afraid of millions of women in pussy hats and extremely afraid of militant Black people.  Protests should be fun.  There should be snappy slogans.  I am up for whatever it takes to make it appealing and normal to the broadest and most diverse segments of society.  This should be done with the hope of pushing for bigger, better, more intersectional, more revolutionary actions.  In the end, the goal of any social movement should be to create fear of the unyielding power of the masses.   This may or may not involve hats.