a version of this article can be found here: https://socialistresurgence.org/2020/04/06/politicians-use-covid-crisis-to-restrict-womens-abortion-rights/ 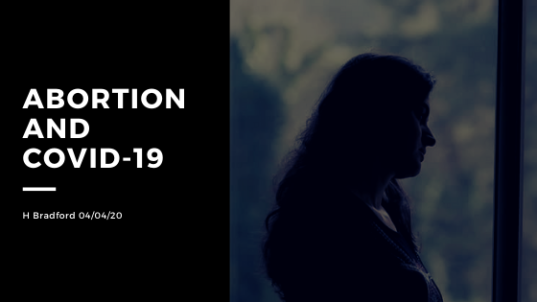 As the COVID-19 crisis deepens, so does the suffering of the oppressed. The oppression of women has worsened during the crisis as they are confined to their homes with their abusers. Within the home, women shoulder the burden of unpaid labor cooking, cleaning, and caring for children who are no longer in school or at day care. As waged workers, women are on the front line of the crisis, as according to CNN, 70% of healthcare and social service workers are women. As women face increased violence, as well as hazardous and exhausting work, reproductive rights are also under attack.

Around the country, the COVID-19 has been used to legitimate restrictions on abortion access. The first states to ban abortion during the crisis were Texas and Ohio. Ohio Deputy Attorney General Jonathan Fulkerson announced that abortions were non-essential medical procedures which should be suspended for the duration of the pandemic. In Texas, Governor Greg Abbott ordered a suspension of non-essential medical procedures, which included abortions. Both abortion bans, as well as those which followed, were opportunistically framed as measures to preserve scarce medical resources. Abortion providers which failed to comply with the Texas order were threatened with a $1000 fine or 180 days of jail time. According to the New York Times the ban included both medical and surgical abortions. As a result, Whole Women’s Health in Texas had to cancel 150 appointments on Monday, March 23rd at their three locations. Some patients had already completed ultrasounds before the order went into effect, but could not have an abortion because of Texas’ mandatory 24 hour waiting period.

Texas patients were referred to Oklahoma for abortions, but on Friday, March 27th, Oklahoma Governor Kevin Stitt announced that abortions were included in his executive order banning all elective surgeries and minor medical procedures. Also on March 27th, the office of Iowa Governor, Kim Reynolds, announced that abortion was among the states’ suspended elective medical procedures. Elsewhere in the U.S. and also on March 27th, Kentucky attorney General Daniel Cameron called upon governor Andy Beshear to restrict abortion. Cameron pressed the state’s Cabinet for Health and Human Services to certify that abortion providers within Kentucky were in violation of the emergency ban on elective medical procedures. EMW Women’s Surgical Center is the only abortion provider in the state. The clinic continued providing abortions last week, as the governor’s order to halt non-emergency medical procedures did not specifically include abortions. Kentucky’s general assembly is currently considering legislation to expand the powers of the attorney general over abortion laws. The legislature is still open and currently pursuing eight abortion restrictions. Alabama also banned abortions on March 27th under the guise of pandemic response. As in Texas, patients had to be notified that their appointments were canceled. Finally, Mississippi Governor Tate Reeves threatened action against the single abortion provider in the state if they did not follow the health department directive to halt abortions as elective procedures. While the pandemic grinds much of society to a halt, there is no end to the assault on abortion rights.

In response to the restrictions, on Monday, March 30th, federal judges blocked Texas, Alabama, and Ohio enforcing abortion bans. Planned Parenthood and the ACLU filed emergency lawsuits against the orders, arguing that they were unconstitutional. Lawsuits have also been filed in Iowa and Oklahoma. Yet, just a day after U.S. District Court Judge Lee Yankel had granted a temporary restraining order on the Texas abortion ban, conservative judges in the US Court of Appeals ruled that the ban on abortion would be reinstated. Once again, patients were informed that they would be unable to obtain an abortion and referred to other states. As other states move to ban abortions as medically unnecessary, these measures will continue to be challenged in courts. Even if the bans are successfully forestalled by court orders, they create barriers for patients who face uncertainty, confusion, and canceled appointments. The American College of Obstetricians and Gynecologists released a statement that abortion should be considered an essential service. The statement asserted that a person’s life, health, and well being can be profoundly impacted by inability to access abortion and because abortion is time sensitive, suspension of services means that it can become riskier or unavailable due to legal restrictions. In addition to Planned Parenthood, the ACLU, and the American College of Obstetricians and Gynecologists, on Monday March 31, Xavier Beccara, California’s attorney general, sent a letter signed by 21 attorney generals to the US Department of Health calling for expanded telemedicine during the COVID-19 crisis. The letter demanded that the abortion medication mifepristone could be dispensed at pharmacies rather than requiring that clinics give the medication directly to patients.

Even without the efforts of anti-choice politicians to exploit the pandemic to limit abortion, the COVID-19 pandemic presents obstacles to reproductive rights. Economists at the Federal Reserve estimate that the pandemic could result in a 32% unemployment rate. With millions of Americans already out of work, many people seeking abortions will be unable to afford the the procedure. Because employer based health insurances may not cover the cost of abortions and increased unemployment will result both in loss of health insurance and the financial means to afford an abortion, many people may be unable to afford the procedure. As of 2018, eleven states banned private insurance from covering abortions and twenty two states ban insurance coverage of abortions for public employees. Due to the Hyde Amendment, federal funds cannot be used to cover the cost of abortions in circumstances other than rape, incest, or life endangerment. Thus, only sixteen states provide coverage for abortion through state Medicaid programs. The cost of an abortion already poses an enormous barrier. Now, more than ever, the Hyde Amendment must be repealed.

Abortion funds are one way that activists and advocates for choice have sought to overcome the financial bariers to obtaining an abortion. However, these funds are already feeling the financial strain of the economic crisis. Alabama’s Yellowhammer fund reported increased need for funds due to job loss. Yellowhammer has begun sending gift cards to patients to reduce barriers to food access and transportation. Fund Texas Choice, another abortion fund, reported that because of canceled appointments, some patients must travel further to find an abortion provider. With fewer flights, bus tickets, and available hotel rooms, patients who must travel to get an abortion face increased financial costs of travel and a lack of ability to travel. Northwest Abortion Access Fund relied upon volunteers to house and transport patients, but now must rely on hotels and ride share companies. These funds are adjusting to the conditions, but the safety measures will certainly increase the financial strain on the organizations. Because the funds rely on donors, who themselves may be financially pinched, donations will likely diminish as the economy crashes. Finally, many abortion funds rely on fundraising through social events, such as the National Network of Abortion Funds (NNAF) annual Bowl-a-thon. The NNAF Bowl-a-Thon, or Fund-a-Thon, is a national fundraising effort which occurs each spring between February and April. Around seventy funds have participated in the Fund-a-Thon, but this year many have had to suspend their fundraising efforts due to social distancing measures and economic uncertainty.

Aside from funding, travel restrictions make it harder for patients to access abortion. Many parts of the country are abortion deserts, or areas which are not served by abortion clinics. For instance, patients living in remote or rural areas of Montana, Texas, Wyoming, South Dakota, and North Dakota must travel over 300 miles to the nearest abortion clinic. Half of women living in Alaska are over 750 miles from the nearest clinic. Banning abortion as part of the response to COVID-19 will only increase these travel distances during a time when it is unsafe to travel due to potential viral exposure and the resources to travel are more limited. Already, patients in Texas must look to clinics in New Mexico and Colorado to get an abortion. In addition to the barrier of travel, according to the Guttmacher Institute, 27 states require patients to wait a specific period of time between counseling and their abortion procedure. This generally ranges from 24 to 72 hours. Waiting periods, which are medically unnecessary and often require in person counseling, increases the risk of COVID-19 exposure and prolongs travel time.

Travel restrictions also impact abortion providers because many rely on traveling doctors. Doctors may provide services to multiple clinics. For instance, Whole Women’s Health, which provides abortions in Austin, McAllen, and Fort Worth relies upon traveling physicians. The McAllen clinic is the only abortion provider for hundreds of miles. Flattening the curve of COVID-19 requires social distancing and restrictions travel, which is why it is essential that laws restricting telemedicine, mandating in person counseling, and requiring waiting periods be suspended. This protects patients, clinic staff, and physicians while ensuring abortion access. Texas Governor Abbott loosened telemedicine restrictions on other health care, but this did not include abortion. Texas is one of the states that requires a physical visit to a clinic. Ohio’s senate passed a telemedicine ban on March 4th, which is awaiting a House vote. Abortion is an essential service and should be available by telemedicine. An accompanying demand is expanded access to medical abortions. In an article in the New York Times, Dr. Daniel Grossman, a gynecology professor from the University of California argued that the need for personal protective equipment could be reduced by providing medical abortions up to 11 weeks, ending the requirement that doctors must meet with patients physically, and if physicians could send abortion medications via the mail. Currently, 18 states require that doctors be physically present when abortion medication is taken. Expanding who can legally prescribe mifepristone would also ensure abortion access during the crisis.

The COVID-19 pandemic has resulted in increased reports of domestic violence as women are made to stay home due to state mandates, social distancing measures, unemployment, and the need to care for children who are no longer in school. Women are at increased risk of sexual and domestic violence during the crisis. Although the exact number of abortions due to domestic violence is unknown, an article in Re.Wire suggested a range between 6-22%. Denying reproductive autonomy is one way that abusers control victims. Domestic violence often escalates during a pregnancy and according to the National Coalition Against Domestic Violence, 20% of women have experienced violence during a pregnancy. It is barbaric to restrict abortion during a time when women are at greater risk of violence, isolation, and control. It is inhumane to restrict abortion any time, as abortion is an essential service that is necessary for the health, well being, autonomy, and equality of women. While patient safety, the safety of health workers, preserving medical supplies, and preventing the spread of COVID-19 are vital concerns, there are many ways to maintain and even expand abortion access during the crisis. Telemedicine, removing barriers to funding, expanding the means of dispensing mifepristone, overturning medically unnecessary restrictions such as waiting periods and in clinic visits, and expanding the social production of medical supplies are a few ways to improve access during the pandemic. Public safety should not be pitted against reproductive rights. There are ways to secure both. Arguments to the contrary exploit the crisis to deepen the oppression of women.