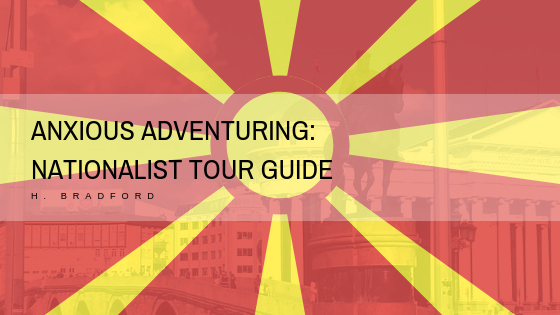 While visiting Macedonia I decided to go on a day tour to Lake Ohrid.  It would have been far cheaper to take a public bus, but I had some worries that perhaps the bus would be overbooked or that I would miss the bus back to Skopje.  To make things less stressful, I booked a day tour to Lake Ohrid.  Of course, Macedonia does not have an expansive tourist industry, so most day tours are private tours.  Private tours are expensive, but they make it easier to learn about different historical sights than I would have learned on my own.  Another downside, besides price, is that it can be socially awkward.  After all, it means that the guide is your only company ALL day long.  That is a lot of social pressure on both parties.  Many things could go wrong.  What if the guide is weird?  What if the guide makes me feel unsafe?  What if we simply don’t get along?  I don’t often do private tours because of the price and the social component.  But, it seemed easier than making a mistake using the bus system in an unfamiliar country for a several hour bus ride that at least online was said to be often sold out… so I booked a guide.

I waited anxiously at my hostel for the guide to arrive.  When he arrived, I felt disappointed that it was a man, since it always feels safer to be alone with women.  I wasn’t entirely alone though, since he had a driver with him.  It made me feel tense, as these two men were to be my company for the day.  Oh well.  The guide was nice enough…and handed me some brochures about various Macedonian tourist attractions.  He gave me an overview of how the day would go and we set off towards our first stop, the mouth of the Vardar river.  Along the way, he shared his knowledge of Macedonia, which he was very passionate and knowledgeable about.  Based upon his particular slant on the information he shared, it became clear that he was….very nationalist.

The guide, who I will call “A.” strongly believed that Macedonia was indeed the homeland of Alexander the Great and that the people of Macedonia, while Slavs, had actually mixed with the ancient Macedonian population.  He substantiated this belief with stories of how some villages continue to conduct group weddings.  He believed that group weddings  were a custom modeled after Alexander the Great’s mass wedding held in Susa wherein marriages were arranged between Alexander and his officers and Persian noblewomen.  This was an interesting theory, though there are many reasons to hold collective weddings (for instance, to save time and to share costs).  He was a strong advocate for a boycott of the referendum, as he felt that if it passed, Greece would have control over street names, statues, books, school curriculum, stadiums, or even outlaw the use of the name Alexander as a given name.  I didn’t quite understand why the referendum would be boycotted rather than simply “vote NO.”  Since the failure of the referendum, I now understand that voter turnout needed to be at least 50% for it to be valid.  To A., the very idea that the matter would be voted upon was insulting.  He felt deeply that not only were Macedonians the inheritors of Alexander the Great’s legacy, Greece had no business telling Macedonia what to do.  This was not framed as an anti-Nato or anti-EU sentiment.  A. also made no indication that he had a pro-Russian political orientation.  His position was, however, a vehemently anti-Greek position.  He spoke about the oppression of Slavic people in Greek Macedonia and believed that the majority of this population still spoke Macedonian (it is unknown how many speakers there are, but in 1951 it was 40,000).  I nodded along to his assertions, but didn’t know what to say when he went on a tirade about how Alexander the Great was not bisexual or gay and this was a myth propagated by Hollywood.  Nationalism, while it has reasonable aspects (yes, Macedonia should have the autonomy to determine its own name and interpretation of history) can also be deeply intolerant, angry, masculine, and homophobic… at least that is the brand of nationalism that I experienced with A.

For my part, I mostly played dumb and asked questions, since that is often the safest way to act out the role of a non-threatening female around angry men.  In any event, I did not want to risk upsetting the person responsible for my safety and transportation.  The day had many awkward moments, as A. had a very pushy personality.  For instance, he insisted that he needed to take my photo at every stop we made.  At churches, rivers, lakes, statues, etc.  I politely told him many times that I was content to have just a few photos of myself, but he pushed to take my photo at every stop, harassing me with compliments about how I looked.  This was uncomfortable, but I lacked any power in the situation to escape this barrage of photos.  I did my best to make polite excuses not to take more photos of myself (usually I have the opposite problem that as a solo traveler I have to ask a stranger for a photo or use the self-timer on my camera).  This was to no avail and a familiar experience.  Consent and boundaries are only dimly understood among most people and part of living and traveling in this world is experiencing situations where these are violated, ignored, or pushed.  Likewise, A. was very devoutly Orthodox.  When we visited two monasteries, he insisted that I drink the water.  I didn’t want to drink the water, since I didn’t trust that it was not going to make me sick (untreated water contains unfamiliar bacteria that he might be used to, but I could get sick from).  He pushed me to drink the water, which he asserted was the purest water in the world.  I took a small sip to appease him and later found myself pretending to drink the water by cupping it in my hand, putting it to my mouth, but letting it slip through my fingers.  When asked about my religious beliefs, I felt it was best to lie- as he was extremely devout in his Orthodoxy.  I told him I was Protestant.  I don’t think I have ever lied about my atheism.  At one point, he told me to light the candles at the monastery.  I am not Orthodox, so I felt uncomfortable, but he was so adamant about it, I lit the candle.  Then, he quizzed me about what it meant.  I had no idea.  He said that the candles are lit because of the sins in the world.  I said something awkward about darkness and suffering, then moved on to ponder the miraculous dripping bone marrow of John the Baptist.

Things became less socially intense when we arrived at Lake Ohrid.  I opted to spent some time alone there and enjoyed blissful social isolation as I strolled around the lake looking for birds and taking in the scenery.  At Lake Ohrid, the guide and I parted ways.  I appreciate that he was very candid about his political beliefs and I felt that it had been a unique opportunity to speak with someone with strong nationalist views.  On the other hand, I was relieved to no longer feel pressured for photographs or to sample water or any other thing that had made me feel uncomfortable during the day.  I survived!  The ride back to Skopje was less stressful.  I had an enjoyable conversation with the more politically moderate driver who was pro-EU and pro-NATO.  He was pessimistic about Macedonia’s future and largely indifferent to Greek’s demands, since Macedonia was too weak to resist it and Alexander the Great was not worth celebrating anyway.  The driver felt that Macedonia was a unimportant, doomed nation (so he lacked A.’s zealous confidence in Macedonia’s purpose and history).  It was interesting to hear this perspective, even if it came across as a dreary pro-Western defeatism.  Despite the polar opposite views on Macedonia’s history, both men agreed upon the horrible prospect of “Greater Albania.”  When I spoke to a very progressive guide the following day, she also feared Greater Albania.  So, oddly, that was the tie that bound the political spectrum- fear of Albanian territorial, economic, and population expansion.  I am not sure what to make of that…

My guides often pointed out whenever they saw an Albanian flag…

I think it is both rude and privileged to put down my guide, as he was extremely hard working and passionate about his job.  In a group setting, I probably would have felt far less uncomfortable and anxious.  He was uncomfortably pushy in some regards and it was emotionally exhausting to try to balance politeness (for safety and a smooth day) and resistance (not wanting to drink unknown water, for instance).   I have had experiences like this before while traveling and living, which I have navigated differently depending upon my own perceived power in the situation (which is often little).  In any event, as trying as the day felt at some points, it was an opportunity to see and hear nationalism first hand.  Despite my support of Macedonian self-determination, on a personal level, nationalism feels smothering, assertive, and intolerant. I am fairly certain that this AP photo by Thanassis Stavrakis of a Macedonian nationalist is a picture of my tour guide….