Many people may not be aware that Duluth has its own feminist activist group, so I would like to take a moment to introduce you to the Twin Ports Women’s Rights Coalition (TPWRC).  TPWRC was founded in September 2014 by a group of activists who were involved with ad hoc protests of the 40 Days for Life.  For those unfamiliar with the 40 Days for Life, it is an international anti-choice event wherein volunteers spend forty days outside of abortion providers with the hope of ending abortion through prayer and protest.  The anti-choice campaign began in 2004, is organized through local churches, and happens in the fall and spring each year.  Last spring, the event mobilized 120,000 volunteers through 4,700 churches.  Locally, the 40 Days for Life is held in September through the end of October outside of the Building for Women from 8 am to 8 pm.  Counter protesting them is important because their presence shames women who use the clinic and seeks to sway public opinion against abortion.  Because 95% of Minnesota counties do not have abortion providers, defending our clinic in Duluth is essential for ensuring that women in Northern Minnesota and Wisconsin continue to have access to abortion services.  Furthermore,  over the last forty years, abortion rights have been whittled away by a relentless onslaught of anti-choice legislation that mandates biased counseling, parental consent, waiting periods, and funding restrictions.  With this in mind, the activists who founded the Twin Ports Women’s Rights Coalition have hosted regular protests of the 40 Days for Life since 2010.  We sought create an organization which could continue these protests into the future and organize other feminist actions in the community.  This is how the organization came into fruition in 2014.

Since its founding in 2014, the group has organized a variety of feminist events.  Aside from the counter protest of the 40 Days for Life, TPWRC has organized a support picket of Roe v. Wade.  Last year, this involved a “glo-test” wherein participants carried signs and wore glow sticks.  We have also organized “Chalk for Choice” events this fall, which entails using chalk to create positive messages and artwork in the plaza of the Building for Women. The group has also organized a feminist book club, which will resume this winter.  Other events include panels for International Women’s Day and Roe v. Wade and monthly “Feminist Frolics.”  Feminist Frolics combine education with outdoor adventure.  For instance, in August we went for a hike after listening to a brief lecture about how patriarchy shapes our relationship to nature.  In September, we went foraging for wild food while learning about the history and economics of foraging and gleaning.  Another exciting project that our group has been working on is launching a radical cheerleading group.  The Rah Rah Revolutionaries has participated in several local protests since their re-launch this fall.  Through these various activities, the TPWRC seeks to promote feminist activism while educate ourselves and our community about feminism. 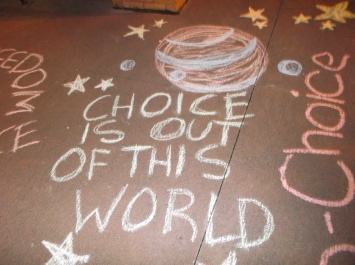 Admittedly, our activist group is modest.  At many of our events, we have less than a dozen attendees.  Our level of activity ebbs and flows with the work schedules of our organizers.  However, the call to feminist activism has hardly been greater.  Feminism is misunderstood and misrepresented in society.  At the same time, women continue to be underpaid and undervalued in the economy.  They continue to be sexually assaulted and abused, then blamed and shamed for the violence against them.  Abortion rights are curtailed, while students are provided skeletal sex education, daycare is as expensive as rent, and we are the one of three nations in the world that does not provide women with paid maternity leave.  Shockingly, denying voting rights to women has become a popular demand in some circles!  It seems that even the most basic rights granted to women have been called into question.  Feminism should be not feared and averted, but should be reclaimed and asserted to make the powers of capitalist patriarchy tremble with fear.  If you would like to join this fight, the Twin Ports Women’s Rights Coalition can be found on Facebook or can be contacted via email at Hbradford@Css.edu