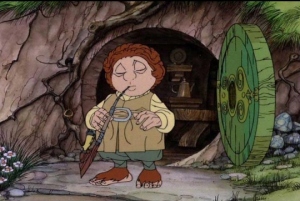 I remember the Lord of the Rings movies came out years ago when I was first at school at CSS.  These movies were always released during finals, so for three years, it was a tradition that I go see the movie after finals.  Two of those three years I attended the movie alone.  One of those three years I went with my friend Libby.  At the time, Libby lived in Minneapolis, so we didn’t often see each other.  She was my only friend.  We probably saw each other twice a year.  Those were hard times.  I was very lonely.    I don’t think I can ever express how isolated I was those years.  In any event, things are different now.  However, some things are the same.  I am back at CSS, finishing a second master’s degree.  Education and I are never far apart.  It is a constant in my life.  Keeping with an old tradition, I went to see the newest and last Hobbit movie.  I also went alone, though thankfully I am not quite as isolated as I once was.  Today is also the last day of my semester, so the movie was a finals week treat.

What does Lord of the Rings or The Hobbit mean to me?  I grew up in the 80s and like children of that era, I was exposed to the Rankin Bass cartoon version of The Hobbit.  I remember watching it in early elementary school and being terrified of the empty gray and brown eyes of Gollum.  The animation was peculiar.  The elves were not lovely and ethereal, but somewhat ugly and menacing.  Elrond had a beard.  I didn’t read the books until college.  I read The Hobbit while studying in Ireland.  I read it in just a few hours while on a bus trip…to Sligo…I think.  I read the Lord of the Rings trilogy while working nights at a hotel.  I didn’t really connect with the characters nor did it particularly inspire me.

My brother, on the other hand, has always been a fan of the series and has connected very well to Bilbo Baggins.  He is more of a homebody, who prefers a peaceful, comfortable life without interruptions and unexpected events.  He has also been to war and felt the frustration that everyone back in the Shire is living their small lives, but he can never really tune out experiences of the greater world.  He has been taken into adventures by forces beyond his control.  These adventures are a means to an end…and the end is always coming home or building a home.  The series means more for him.

I like to travel and don’t mind trying new things….to some degree anyway.  I am not a true adventurer, but I am a curious person.  The world is a smorgasbord of experiences and things to see.   Returning to reading The Hobbit, while in Ireland…I took a death and dying class.  It was one of the most transformative courses I have ever taken.  I don’t remember why, but we spent a lot of time journaling about Joseph Campbell’s book, The Hero with a Thousand Faces.  We had to create narratives of our experiences in Ireland or in life in general…as if we are the hero on a journey…passing through all of the literary tropes that heroes do.

I really enjoyed watching the movie today.  Maybe I felt the hero narrative more strongly.  While I don’t identify with any of the characters, it made me reflect on my own journeys.  I have never been to war like my brother so I do not relate to the narrative as literally.  Nevertheless, there have been some challenges.  I thought of them as I left the movie.  My greatest challenges have been with isolation, anxiety, depression, and poverty.  I will tell you about those.

I am a strange person who is hesitant to open up to people.  I watch people with caution and am slow to make friends.  These days, I have some friends.  But, this accomplishment took me several years.  After graduating from high school, I was quite alone.  My first college years were spent working hard and studying hard.  There was no social life.  I did not converse with other students or take pleasure in their company.  At the time, I also suffered severe social anxiety.  Going to a restaurant or even interacting with a gas station attendant was painful.  I wanted to hide from the world.  If I had a ring of power, I might use it to become invisible and quietly slip away into the world….unseen and unknown forever.  The joy in my life was travel.  Travel was an escape from myself.  While I was still isolated, at least I was isolated in interesting places.  And, while it was also an escape, it was also a way to find myself.  Travel in Ireland exposed me to new ideas.  I saw that socialism was at least semi-acceptable there.  Political talk was not taboo or boring, at least among people I encountered.  Going there liberated me from some old ideas and an old sense of self.  I also felt happy alone.  I walked a great deal…hours a day…sometimes in the rain….along the sea….along winding roads, pastures, and hills.  My mind could think…and love nature….and love myself….and I felt happy…even though I didn’t have any friends.

Coming home, I faced depression.  Life was boring.  Everything seemed inadequate.  I couldn’t find as much happiness in being alone.  However, my changed self had built a foundation …which helped me find my place…and new friends.  I eventually made friends with fellow socialists…I guess my social niche.   So, while I struggled with depression for several years, I at least built connections that last to this day.  My life is changed for that and things will never be so dark and lonely again.

Another adversity was moving to Mankato for graduate school.  It is only three hours away, but I was alone again.  At best, I saw my friends once a month.  My first semester…if not year… I didn’t really make any close friendships.  However, the second year I became friends with Jeremiah, Jenn, some of my sociology cohort, and members of the atheist club.  So, thanks to that foundation of self that I had established, I made some political, atheist, and sociologist friends.  Things improved.  However, due to changes in my financial aid my second year…I did struggle financially.  I paid for the cost of my dorm out of pocket…which was quite expensive.  I couldn’t exit the contract for cheaper housing.  With that said, sometimes I lived on $20 for two weeks.  This was miserable.  I shopped for groceries at the dollar store.  I feared that I would go hungry.  I feared hunger.  Sometimes I was hungry.  I applied for food stamps, but was denied because I only worked 20 hours a week…and needed to work 25 to qualify while in school.  This sucked.  My brother sent me $200 and Jenn gave me $50.  I will forever be in their debt.  Thinking about it makes me cry!  I will tell you…you never forget not having money for food.  I remember in the 4th grade, we ate potatoes and eggs for a month when my father was laid off.  You never really forget that.  Now, I don’t want to be whiny, as I have amazing privilege.  And…I was doing all this for education!  Again, a luxury.  However, that does not take away from the sense of fear or misery.  I remember the campus had a food drive to raise awareness of hunger in the community.  It was rather astonishing.  I wondered how many people on campus were hungry?  Hunger is always seen as something far away…maybe in Africa….but it isn’t.

The point of this is not to be woe is me.  These adversities are minor compared to those faced by others.  I think…maybe the point is that we all have journeys and challenges.  The Hobbit movie resonated with me today because it made me consider my own journey.  Although it is different…and certainly not as dramatic….maybe it attests to the power of literature or film to speak to our condition.